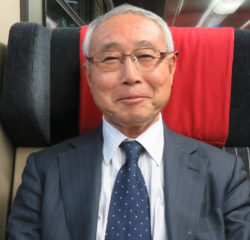 I started GVIN Ltd. in 2003. GVIN Ltd. is a “Think Tank” to support Japanese industries to achieve “Globalization” through open innovation strategy.

I was in Hitachi, Ltd. For 37 years, and engaged in the research and management of R&D. I was dispatched to USA and Europe for 6 years respectively. In USA, I stayed one year in New York and 5 years in Silicon Valley, as a scientific representative and started many projects between Hitachi and many partners of private sectors and public sectors.

In Europe, I stayed 6 years at Maidenhead as the Director in charge of managing entire R&D in Hitachi’s European operations. Actually, I was involved in establishing and managing Hitachi Cambridge Laboratory, Hitachi Dublin Laboratory and Hitachi Sophia-Antipolis Laboratory. So, I have achieved extensive networks in USA and in Europe.

I am now a board member of the FMT (Forum Management for Tomorrow, Inc: http://www.shinkeiken.com/). The FMT was established in 1982. This is a prestigious consortium having members over 550 Japanese industrial companies. Many technology top people, such as CTO, are registered to the FMT. They are very much interested in “globalization” of their companies. So, I introduce them overseas university professors, VCs, ventures, celebrities, etc., by hearing their needs. Sometimes, I will visit these countries together with industry people. Through this series of processes, international collaborations will take place to promote globalization of these companies.

I am also involved in holding the International Symposium of DFGI (Dialogue for Global Innovation) for the last 10 years. This is a rather small-scale ”semi-closed” Symposium with the size 60 people maximum. GVIN Ltd. is the main body to organize these Symposia. We have held 6 Symposia already – twice in Japan and 4 times in Europe. A number of top Japanese industries, university professors, government people, etc. jointed. Many distinguished people from Europe, universities, entrepreneurs and industries participated in. These Symposia were very nice opportunity for “creating global innovation” through global knowledge interaction.

GVIN Ltd. is going to contribute to promote and accelerate global open innovations through these Symposia.

Dr. Yutaka Kuwahara is a person to be friendly with almost everybody.

He graduated from the University of Tokyo, Department of Physics, and joined Hitachi Ltd. He was engaged in the development of architecture of large-scale computer system until he was assigned to stay in the USA.

In Hitachi, he was involved in establishing HIVIPS (Hitachi Research Visit Programs) and a number of overseas research laboratories such as Hitachi Cambridge Laboratory.

He stayed in USA for 6 years and also in Europe 6 years and met many distinguished people.

He also visited all over the world more than 100 times and met and got friendly with many different people.

In 2003, he started GVIN Ltd. and became president and CEO until today. He also became chairman and CEO of CSR (Cambridge Silicon Radio) in 2004 until 2009. In 2009 until 2020, he became CEO of ams (austria microsystems) Japan Ltd. until today.

He is a member and officer of many academic societies such as Engineering Academy of Japan (EAJ), Research Innovation Society, Japan Development Engineering Association, Development Technology Association, etc. He also is councilors of Japan-Austria Society, Institute for Future Technology, etc. He is an advisor for Junsei Educational Institution.

He awarded degree of Ph.D. from the University of Tokyo.

He has published more than 13 books, as well as many papers for international journals. Some of his books are used as textbook at Japanese universities. He also lectured at universities all over the world – many in Europe and in USA.

He has published numerous papers and made numerous lectures at international conferences.

He has hobbies of mountain climbing, golf, piano playing and oil painting.